At any given time, there is someone doing something distinctly different. Something no one else can do, or even try. Something which, in what is both a hypersensitive and cynically-ironic art scene, appears independent enough to slip in and out of the conversation unaffected.

It is difficult to criticise the sculptures of Fredrik K.B. without casting doubt on all human experience – which is an amusing thought until you realise this also applies to your own experience.

What’s equally difficult is comfortably placing this work within the thought structure we call “contemporary art” – although to a degree it of course is – since “contemporary art” becomes such a hopelessly inadequate term when referring to solid things made of stone and a style which hints just as much at the time before mankind as it does to the time after. The catchment area becomes too broad, the latent message too acute: Not only do we have to deal with no-longer existing, but also with the fact that we never did.

It is from this perspective that we must relate to this work; from the single moment that is now, and tens of thousands of years in all directions, from the fossil to the mutation; and the fact that almost everything should be understood like an irritated cobra; that we should nevertheless recognise the man’s work via what is distinctly non-human. The reptile happens to be directly present, as though grown from the human head into which it sinks it’s teeth, and it’s presence is often so sublime that I daren’t say for sure whether it is conscious or not.

The form is an irritated cobra, as mentioned, but also a more loving heart-shape of two copulating snakes, and a striped-pattern characterising most of the pieces.

The exhibition now on view at Galleri Semmingsen is rich, brimming with generosity, and consists of many components – something that makes discoveries like this easier.

After all, it’s not only about snakes, it’s just as much about humans as it is fossils; and how these things are possibly interrelated and interact. And the way it is presented seems liberatingly un-curated, or at least with no particular overruling of the white cube’s premise; there is no drastic positioning in the room and – although the sheer volume of work allows very little space in the gaps – this is effective when it comes to directing the eyes to what matters. You really have to see the pieces one by one; there is no messaging or information hidden in their placement, no special effects; no dynamic between the pieces, other than what would have been there regardless of how they were placed.

Nevertheless, it is three-dimensional work in a room, so even this is careful – I could say “conservative,” because in a way it would be correct, but it is still more wrong than right.

Besides, it is potentially stigmatising; it would be lazy to characterise any aspect of this as “conservative” since it concerns the figurative work of a sculptor working with stone. It would be too easy, and it would obscure what’s really going on here.

I would say that carving these things into stone is pretty tough work. Not exactly for wimps. Not something I would spend much time pondering over how long it takes to complete. The practice is so archaic that the word “conservative” is about as useful as the term “contemporary art” – it just isn’t enough. At the same time, this potent mix of human and reptilian hybrids is far too radical – visually disruptive and with an existential punchline that allows us to sense the contours of future myths. It is simply work for the future, solid enough to endure, even after the last remaining one of us has switched off the light and left what is essentially a quite amazing planet. Of course they exist in the here and now, but they equally address a period of time none of us will experience.

“Conservative” in this context becomes an irrelevant label, and so it would be lazy of me – if not directly conservative! – to say that some of this is conservative. And also because it is more correct to say that the curatorial treatment of these things is actually careful, and without exaggeration.

I wouldn’t dare to imagine how these things might be exhibited at a super-curated group show at a hip gallery in Berlin. It’s best to present them as they are here. Not simply because a more unpredictable treatment would have been precisely that – unpredictable, without necessarily adding anything – but also because, as already mentioned, it forces even the most hardened visitors (and I consider myself among them) to view it all piece by piece. And it then offers even the hardest of the hard (which is probably me) this apocalyptic vision of inherited genes suddenly stirring throughout the organism before screaming panic-stricken.

I’m sure it seems like I’m making a big deal out of this, and of course I am, but that’s because I sat looking at it for a little too long.

If you were to take just one single piece out of this context, then make a huge version of it and place it on a roundabout in a mid-sized Norwegian town, not even those who normally freak out at sudden artistic embellishments would bother to protest. How would they? No one can come here and say they can do this themselves at home in the garage, or that their kids can do better, or that it was something a monkey could have done. Because very few people can do this, certainly no-one’s children, and monkeys have better things to do than chisel away at stone. Within a week, everyone would have become collectively blind to the thing on the roundabout. In fact, it’s possible I would have gone blind myself. After all, most things on roundabouts – with only one bright red exception in Oslo – become diffuse after you’ve passed them a few times. And the sculptures of Fredrik K.B. in no way function as catchy visual exclamation marks, or play on any form of direct confrontation. They eat, slowly and patiently, into your consciousness until they find somewhere to cling to and be remembered; making you aware of your discomfort. In any case, it was your own discomfort all along, and it’s better that way because in the days that follow you may often stare down into the abyss in this endless night of the soul, but you’ll occasionally manage to raise your eyes and look beyond the stars.

But I’ll say that ideally, like here, one relates to more than one piece, and the gallery is perhaps the only place where this spark can originate, illuminating the twilight between two darkness we think of as “a life.”

Outside the gallery – in a far more oppressive fiction which attempts to cover up the fact that we no longer live in a society but an open market – the noise level is so tyrannical the only way to cling to as much as a fragment of attention is to make more noise than those making the most noise. It has of course been that way for some time, and we of course know how it will end.

This is a world of noise. For now. 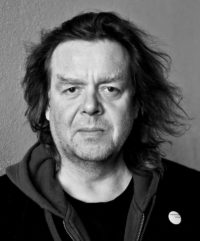